Three spooky things you need to know about speaking at Ignite Liverpool. 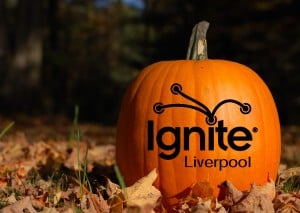 Welcome to the darker side of Ignite Liverpool!

Over the past few years, Ignite Liverpool has gone from strength to strength, but as it’s Halloween, we thought we should warn you about the darker side of Ignite.

1) It bends time in a very strange way

Every Ignite talk is 5 minutes long: that’s about the amount of time takes to boil an egg, and how long it took Paula Radcliffe to cover a mile, when she set the  women’s marathon world record in 2003.

In 5 minutes you could listen to We Built This City on Rock ’n’ Roll by Starship, or Love Me Do, by The Beatles, twice.

But something weird happens when you’re speaking at Ignite.

Things all seem to be perfectly normal, until you realise you’re up next. Then, as you stand by the side of the stage, listening to the compère say your name, everything slows right down. Seconds stretch into minutes as you cross the stage and step up to the microphone, and, eventually, after what feels like a decade or two, you get the signal that you’re good to go.

Whoosh! It’s all over.

The 5 minutes you’ve been preparing for whizz by in the blink of an eye, and the audience are rewarding you with praise and applause. Brrrrrr, freaky stuff!

A word of warning though, this kind of time-bending can be addictive. As you step off the stage, you might already be thinking about what you can talk about next time – speaking at Ignite goes by so quickly, it’s a rush.

Oh ok, that’s down to the speakers, rather than the event itself – but that’s our point. The fact that the speakers thought wheelie bins, yeast, and oddly-mangled latin were interesting is what made them good topics for an Ignite talk.

This is your opportunity to show the world *why* you find your thing so interesting.

3) The audience, and organisers are so friendly, it’s kind of creepy.

We live in a cynical age, where people watch tv shows just to see people make idiots of themselves in public. But it’s not like that at Ignite Liverpool.

At Ignite, you get a whole crowd of people willing you on. They’re all keeping their fingers crossed, hoping that you’re going to own that stage like a rock star for your 5 minutes in the spotlight. You’ll get applause as you arrive on stage, applause when you finish your talk, and people will spontaneously come up to you afterwards and tell you how much they enjoyed your talk – and they’ll mean it too.

As for the organising team, we’ll welcome you to the event, make sure your PowerPoint works properly, and say really nice things about you on twitter. We can even offer feedback and advice on your talk or your slides, if you give us enough notice.

Hmm, maybe those things aren’t really that spooky after all – but hey it’s Ignite, not fright night. And there’s still plenty of time to register to speak at Ignite 16 on November 14th – as long as the Zombie Apocalypse doesn’t happen in the next fortnight.