Our Give it a Go speakers 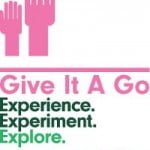 So what do Moonwalking, Shaving, the Rubik’s cube and archery have in common……….

Yep, you guessed it, they are a selection of the exciting talks taking place at our next event. So come along to one of the most anarchic events around at the Liverpool Guild of Students on the 1st November.

And if you don’t like a talk then the next is only five minutes away.

Michael McDaid – Moonwalkers are old or dead, what happened to human space exploration

Andy Powell – Shaving: How it demonstrates a technological steps backwards

James Woods – Nuclear: Unclear
A five minute talk highlighting a \’Dangerous Legacy\’ of the Cold War – nuclear weapons. The once almost diminished threat that is lurking behind more documented issues that concern humanity such as the financial crisis and climate change. How many nuclear weapons are on the planet? Who possesses such destructive arms? Are we sitting on a nuclear time bomb?

Gareth Hughes – Why free will is dangerous

Tom Williamson – The Nonsense of Homeopathy

Dr Tom Flynn – 16 Degrees of Separation: An Introduction to Wikiorienteering